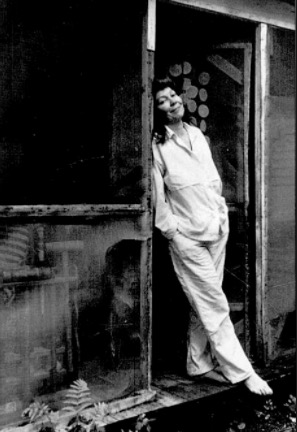 “With three daughters to raise on her own, Stone began a series of poetry residencies and visiting teaching positions at a number of colleges and universities across the United States, beginning with a two-year poetry fellowship from the Radcliffe Institute for Independent Study of Harvard University in Cambridge, Massachusetts. When she was not teaching, she would return with her family to a farmhouse she had purchased in Goshen, Vermont. Her itinerant life ended after twenty-five years when she was awarded tenure at the State University of New York at Binghamton in her seventies. After her retirement, she received an honorary doctorate from Middlebury College in Vermont. She published thirteen print collections of poetry in her lifetime and received many awards, including a Pushcart Prize and the National Book Award; her book What Love Comes To: New and Selected Poems was a finalist for the Pulitzer Prize.

Her verses express, with often acerbic wit, what has been called her “tragicomic vision”: an unrelenting and incisive commentary on poverty, loss, the human body, relationships between men and women, odd characters on the edges of American communities, old age, the universe, and poetry itself. At times bawdy, at times profound, her poems never fail to make a sharp point.”

“In the Next Galaxy”

Things will be different.
No one will lose their sight,
their hearing, their gallbladder.
It will be all Catskills with brand
new wrap-around verandas.
The idea of Hitler will not
have vibrated yet.
While back here,
they are still cleaning out
pockets of wrinkled
Nazis hiding in Argentina.
But in the next galaxy,
certain planets will have true
blue skies and drinking water.

SANCTUARY (1300-50 Middle English from Late Latin "sanctuarium"): 1) a sacred or holy place; 2) the biblical Tabernacle, the Temple in Jerusalem, or the holy of holies within these places of worship; 3) a temple or church, 4) the part of the church around the altar, 5) a sacred place where fugitives are safe from arrest, 6) any place of refuge, 7) a place of refuge for wildlife, birds, or butterflies.